If I had a dollar for every person who told me during their past medical history interview that they have “flat feet”, I’d have a small nest egg in the bank. Most of the time when I do my examination however, I see nothing of the sort. Especially nowadays when shoe manufacturers have capitalized on “over-pronation”, many people are under the impression that they have flat feet when they really don’t. In fact, truly flat feet are rare. 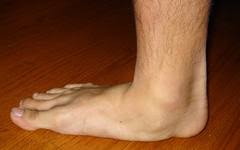 Pes planus, or flat feet, can be either congenital or acquired and is defined by the loss of the medial longitudinal arch of the foot. The arch of the foot is a tough, yet elastic combination of ligaments, tendons, and fascia connecting the forefoot to the hindfoot. It acts as an adaptable and flexible base of support for the entire body, dissipating the forces of weight-bearing and storing mechanical energy during the gait cycle. Dysfunction of any portion of the medial longitudinal arch can result in an acquired pes planus. Risk factors for developing flat feet include excessive tension on the gastroc-soleus complex (the calf muscles), obesity, ligamentous laxity, or posterior tibialis tendon dysfunction. The function of the posterior tibialis tendon is to support the arch as well as invert and point the foot. A failure or dysfunction of the tendon can contribute to a fallen arch in weight bearing. Posterior tibialis dysfunction is most common in females over the age of 40 who have other chronic health issues such as diabetes and obesity. It can also occur in people who have congenital pes planus who participate in repetitive high impact sports.

It’s not uncommon for toddlers and young children to have flat feet due to ligamentous laxity and a lack of neuromuscular control. However, most children develop normal arches by age 5 or 6. It is a small percentage of children who fail to develop a normal arch by adulthood, making the percentage of people with truly collapsed arches, or rigid pes planus, relatively small. It is estimated that between <1-28% of the population has some degree of pes planus, but a majority of these cases are flexible pes planus. With flexible pes planus, the arch is present in non-weight bearing, but absent or decreased in weight bearing. Rigid pes planus is rare. There is a strong genetic component of pes planus, so it typically runs in families. People with congenital ligamentous laxity secondary to Down syndrome, Marfan, or Ehlers Danos can present with flat feet. The ligamentous laxity associated with pregnancy can also cause flat feet, but typically corrects itself postpartum.

The main symptom of pes planus is foot pain due to strained muscles and connective tissues. People may have pain along the posterior tibialis tendon or with a single leg heel raise. If the collapse of the arch is severe, the ankle may turn inwards and the bulk of the body weight is placed through the medial border of the foot. Such a distortion of weight bearing often results in abnormal biomechanics of the lower extremities and can cause calf, knee, hip, or low back pain.

Treatment of pes planus includes increasing the flexibility of the feet and lower legs, strengthening the small muscles of the foot, lower legs, hips, and core, training proprioception, and patient education. LYT Yoga® certainly ticks all of these boxes! In fact, if you want to learn about all things feet, Lara has an upcoming workshop entitled “Foundations of the Foot” on October 30 that you won’t want to miss! Check out the link below! Until then, I’ll see you on the mat!