This week we opened up registration for our LYTⓇ Level 2 Core Module, which is part of our 300-hour LYT yoga teacher training program. The term “core” has been around forever and has morphed over the years into considerably more than it was 20+ years ago when I graduated from physical therapy school. For many years, we really only looked at the core from the standpoint of the abdominals and lower back musculature and their roles in supporting the spine. As our understanding of the core evolved, so did physical therapy, branching out into specialty areas including the pelvic floor and diaphragm. We began looking at injuries of the extremities and how they related to weakness in the core stabilizers, not only around the spine, but also around the proximal joints of the hips and shoulders. We began to describe the core as a container, encompassing the entire trunk or axial skeleton. However, for the purposes of this article, I’m only going to be talking about the muscles of the abdominal core.

I love the concept of visualizing the abdominal core as a cylindrical container. Imagine an empty soda can…you could stack a solid amount of weight on top of it before it would collapse, right? Yet, if you put one little dent in the side of that can, it takes a LOT less force to make it crumple. Let’s put this into the perspective of the human body…the spine has been shown to buckle under compressive forces as low as 20 lbs in the absence of muscular contribution. I’m pretty sure my purse weighs more than that at times! Certainly my kids’ backpacks! It falls to the container of the core to stabilize the spine against any type of external compressive or shearing forces.

The container of the core has passive, active, and neurological components that contribute to its stability. The passive structures include the vertebrae, intervertebral discs, ligaments, and joint capsules, as well as the passive properties of muscles supporting the spine. These passive structures stabilize in the end ranges of motion and transmit load information to the nervous system. The active components are the muscles, which provide dynamic stability to the spine, as well as sending movement information to the nervous system. Finally, the neurological component is the brain or central nervous system, which is the center for incoming and outgoing signals. Continuous interaction between all three components is necessary to maintain core stability. Having a stable core requires instantaneous changes being made by the brain to elicit the appropriate muscle recruitment for stability and mobility in response to demands placed on the body. Yikes. No wonder it’s so hard!

When talking about the container of the core in terms of its musculature, it begins at the base, which is the pelvic floor. The floor of the pelvis is made up of layers of muscle and connective tissue, which stretch like a hammock from the pubic bone to the coccyx (tailbone) and from one ischial tuberosity (sit bone) to the other. Next, the trunk is supported by the anterior, lateral, and posterior abdominal walls, making up the sides of the core container. The anterior abdominal wall musculature includes the rectus abdominis and a small muscle called the pyramidalis, which is present in 80% of the population. The lateral abdominal wall musculature includes the external and internal obliques and transversus abdominis. The posterior abdominal wall musculature includes the psoas major, iliacus, quadratus lumborum, and psoas minor, which is present in only about 40% of the population. And then finally, we have the ceiling of the core container, which is the diaphragm. The diaphragm is a parachute-shaped muscle that runs between the chest and abdomen. Although its main function is for breathing, it works with the abdominal muscles to increase the intra-abdominal pressure in order to support the spine as needed. 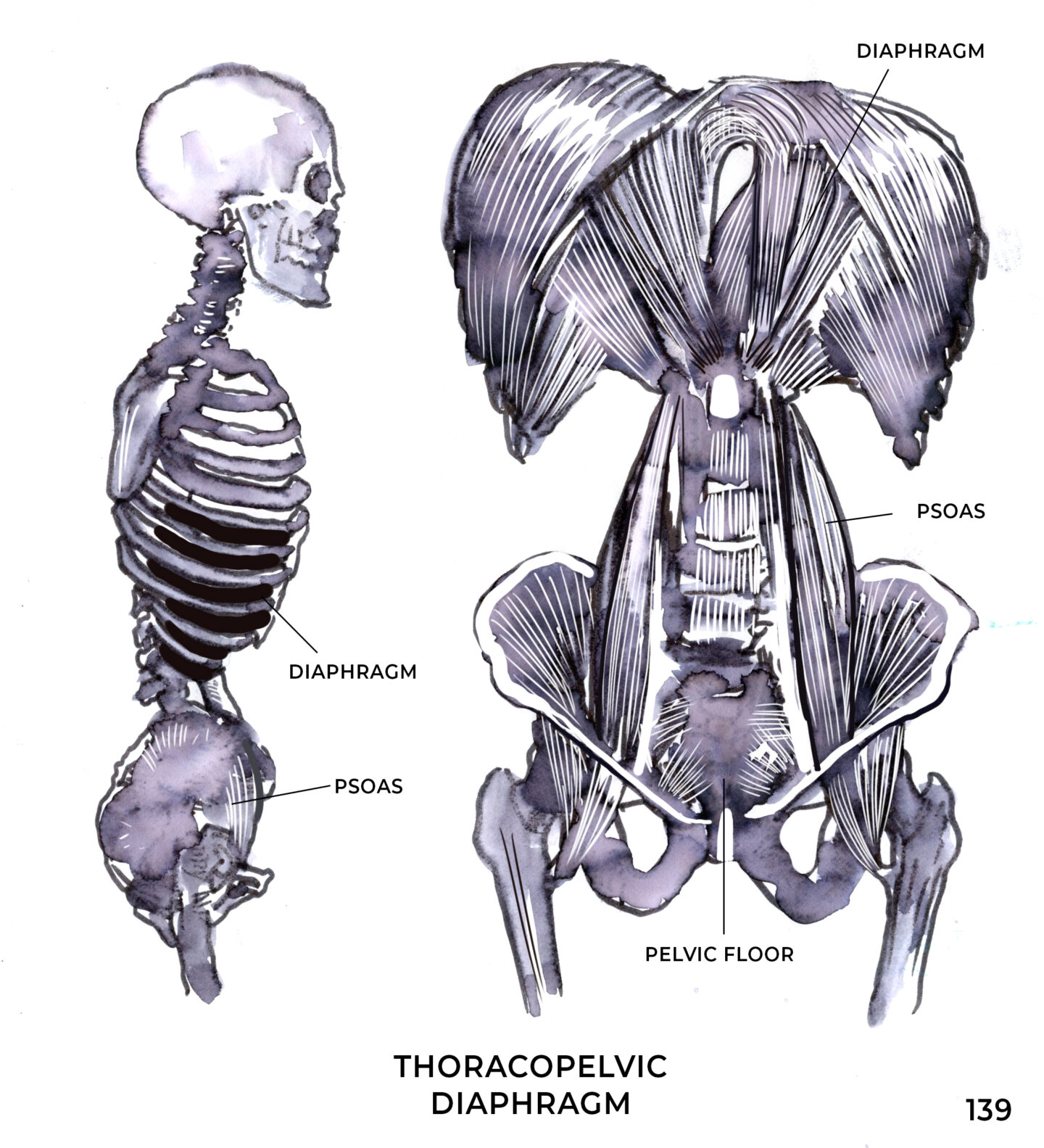 The ability to tap into the strength of the container of the core takes practice. The inherent boundaries of these muscles create a corset-like effect to stabilize the trunk and spine. Any movement beyond a neutral spine and pelvis, into areas of hyper-flexibility for example, requires integration between the central nervous system and these stabilizing muscles. My favorite way to describe this core containment is by creating an abdominal brace…360 degrees around the spine. This ability to tense the core musculature is similar to what you would do if someone was going to poke you in the belly. You would tense your abdomen all around to keep the fingers from penetrating into the organs, right? You should be able to feel the muscles tighten in front, around the sides, and even into the back body. It’s more of a hug around the trunk than a hard contraction. So you can still move and breathe easily with an abdominal brace. If we can learn to move this way on the mat, it will translate off the mat as well. I like to think of it as an active koozie for our beer can of the core! 🙂 You can even hug in the pelvic floor and diaphragm from above and below at times of greater need, like those asymmetrical poses. You’ll feel the difference in your body, I promise. Your practice will feel like more work, but you’ll reap greater rewards. So give it a try next time! Until then, I’ll see you on the mat!