You’ve heard us say it– and you may have even purchased our shirts in the LYT store. Posture F*cking Matters.  Now I’m not sure how you could be a LYT lover and not have heard of the Triple S, but just in case, I’m going to break it down for you. 🙂

Triple S is a termed Lara coined a few years ago as a simple way to remember how to achieve the optimal posture. There are three bony landmarks to remember:

In order to obtain an optimal postural alignment, the skull, scapula, and sacrum should be in line with one another. For example, if you were to stand up against the wall, the back of the skull, scapula and sacrum should all come in contact with the wall. The Triple S recreates the natural curves of the spine and stacks the head atop the vertebral column. So why is this important? 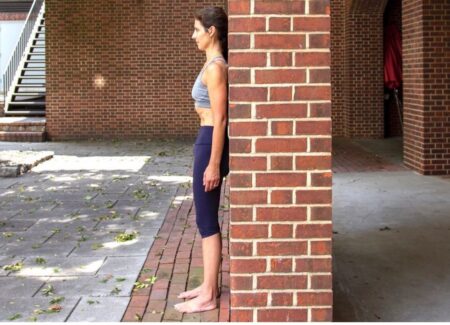 As Lara likes to say, the forward head and rounded shoulders posture is a pandemic of its own. Just to give you an idea how much the slightest shift forward of the head impacts the neck, consider this: A normal human head weighs roughly 10-12 lbs. If we were to shift the head forward 15 degrees at a time, the weight through the cervical spine increases as follows:

That’s pretty staggering when we consider that most people probably hold their head in 45 degrees of cervical flexion while texting or playing on their phones…roughly five times the amount of strain through the cervical spine. But that’s not the only issue at hand. Coupling the forward head with the rounded shoulders and upper back results in something we call “Upper Crossed Syndrome”. 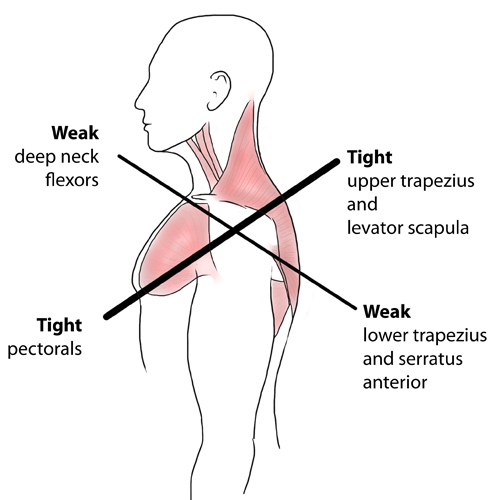 Hence the name, Upper Crossed Syndrome. This imbalance is due to losing your Triple S both in standing and sitting. The number of secondary issues that arise from the aforementioned imbalance in the body is all but endless. It includes (but far from limited to): tension headaches, jaw pain, neck pain, shoulder pain and dysfunction, low back pain, rib pain and dysfunction, thoracic outlet syndrome, carpal tunnel, etc etc.

So take a moment and find your Triple S. You can start on the floor, where gravity can assist. Progress to the wall and then to sit and stand independently. Your future self will thank you!