The Science of Sweat

If you’ve been following us all week long, you know that we’ve been focusing on SWEAT. Ewww, gross, right? NO! We love to sweat in LYT Yoga®! Have you ever wondered why we sweat? What is the science behind perspiration? To put it simply, sweating is our body’s natural air conditioning unit. When our body temperature rises from exercise, heat, stress, or even hormone changes, we sweat to keep our body temperature at a comfortable 98.6 degrees F.

Most know that sweat glands are located within the skin. However, you may not know that we have three types of sweat glands, which differ in size, location, and function: 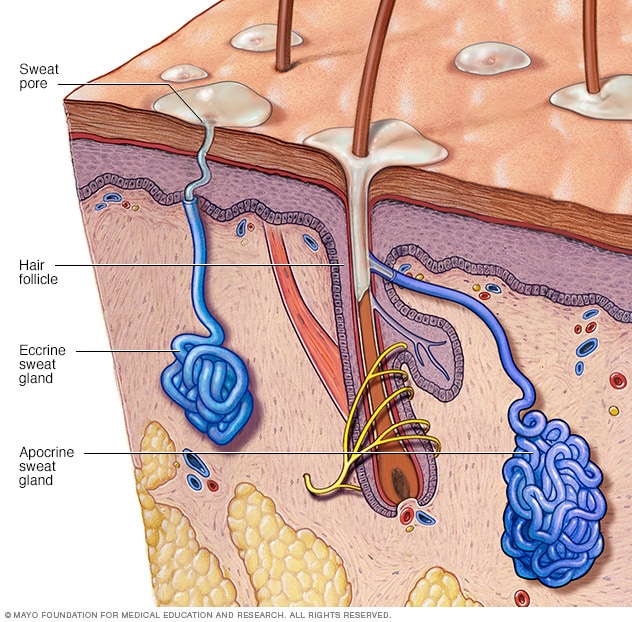 So why do we sweat? In a word: thermoregulation. The mechanical efficiency of humans is not great, so we need a mechanism to rid the body of any excess heat build-up. The primary means by which the body heats up is externally from the environment and internally by our metabolism, which is the process of converting food to energy and the elimination of waste. The amount we sweat is primarily determined by these two factors. During exercise, a large amount of heat is produced by the muscles as a byproduct of metabolism, which is directly proportional to exercise intensity. In addition, heat from the air is transferred to the body when it’s hotter than the temperature of the skin, increasing the body temperature externally. When either or both of these factors cause the internal temperature of the body to rise, our sweat glands release water to the skin surface, transferring heat from the body to it. There it quickly evaporates, cooling the skin and the blood beneath. This is known as evaporative heat loss and is the most effective means of thermoregulation in humans.

There is a common perception that sweating has a variety of other critical functions for maintaining homeostasis in the body unrelated to thermoregulation. Eccrine sweat is thought to play a role as a natural barrier to skin through its delivery of water, moisturizing factors, and antimicrobial peptides, pointing to a potential role in defense against skin infection. The notion that sweating accelerates the breakdown and elimination of toxins from the body has been around for years as well. As attractive as this idea sounds, there is little to any solid evidence to date that supports this. Although they do participate in this function, the role of sweat glands is minor as compared to the liver (breakdown) and kidneys and GI tract (excretion).

Finally, sweat is not just water. It also contains sodium (Na), chloride (Cl), potassium (K), calcium (Ca), and magnesium (Mg). This is important because something that has been found in the literature is enhanced sweating with better heat acclimation and aerobic training. Heat adaptation leads to improved salt (NaCl) conservation through a decrease in sweat, minimizing disruptions to the whole-body electrolyte balance. While the degree of conservation varies in the literature, the reported decrease in salt loss after 10 days of heat acclimation ranges from ~30-60%. Aerobic training has been associated with an earlier onset and greater responsiveness of sweating in relation to body core temperature.

So get out there and SWEAT and get on the mat today for a FREE class on LYT Daily with Rhonna! Let’s sweat through these down dog days of summer together. Your body will thank you!