One of the first things that drew me to LYTⓇ Yoga (then YogaStream) was the inversion practice. I used to do gymnastics when I was middle school age and younger, so I grew up comfortable on my hands as a way to get from point A to point B (ie. with cartwheels, walkovers, and handsprings). But the idea of holding a handstand, let alone in the middle of a crowded room…umm NO. I had been to other yoga studios where handstands, shoulder stands, and plow pose were offered at the end of most classes. Did I do them? Yes. Could I do them well? Yes. Anyone who knows me, knows I’m naturally pretty strong. My job as a physical therapist is demanding and I’m very physically active, so doing crazy arm balances and advanced yoga poses was relatively easy for me at the very start. But not the elusive handstand. Getting that took discipline, work, video assessment, and a daily practice to finally achieve. But this article isn’t about the handstand. It’s about why to do it versus the headstand.

When you think about it, it makes little physical sense for the headstand to be offered as the “beginner” inversion. In what alternative universe do we feel putting up to 40-48% of our body weight through our neck is a good idea? This is the axial load that studies have shown is being put through the head and neck in a headstand. Now people will argue that you’re supposed to be putting most of the weight through your shoulders and hands, not the head. However, I would argue that most people and especially beginner yogis don’t have the shoulder or scapular strength to do so. Which is why forearm stands are that much harder to do. You are taking close to TWICE as much weight through the shoulder girdle, without the head there to support the other 40-48% of the bodyweight.

The cervical spine is not built to carry a load greater than the head. If you look at the structural difference between the lumbar and cervical vertebrae, you’ll see why. The lumbar vertebrae have evolved to carry the weight of the upper body or, for argument’s sake, half of the body weight. Its large vertebral body (the solid cylindrical part) allows for this. The vertebral body of the cervical vertebra is roughly ¼ the size of the lumbar vertebra. Which makes sense given how relatively small the head is in comparison to the rest of the body. So why would we still subject ourselves to a pose that puts almost half the body weight through it? No, thank you. 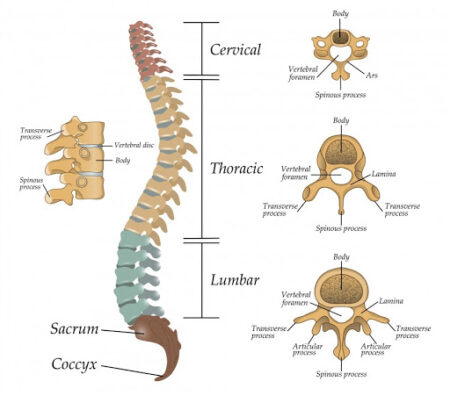 Another consideration is posture. We spend so much time flexed at the neck while bent over our phones or laptops. This offloads and thereby weakens the posterior chain of the body. Most people have a flattened curve of the cervical spine as well, which essentially means we walk around in perpetual cervical flexion. Studies on axial compression forces required for failure of the cervical spine (in cadavers) was four times less in a flexed position than in neutral or an extended position. This means it takes a lot less compressive force (which is what a headstand is doing) to injure the cervical spine while it’s flexed than while it’s extended or in neutral. So unless you have a perfect curve in your cervical spine (which few people do) and are strong enough in not only the paraspinal musculature but also the shoulder girdle to offset the body weight, it’s just not worth the risk.

Lastly, we have too many important structures at the craniovertebral junction (CVJ), or where the head meets the neck. The CVJ houses the transition from the brainstem to the spinal cord. It also is where the vertebral arteries (which provide blood flow ultimately to the brain and spinal column) and first cervical nerves (which innervate the head and neck) share a small groove on either side between the skull and the first cervical vertebra. I don’t know about you, but I don’t want to mess with any of that.

So take the hard road and work towards your forearm balance or handstand. Keep weight off the head and neck! Handstand, don’t headstand. Or as I like to say, “Lift switch, swing it, or step it.” 🙂 Until then, I’ll see you on the mat!